Mountaintop Rice Field is located in the Old House Field in Tianzi Mountain Nature Reserve in Zhangjiajie National Forest Park. The total area of the field is roughly 3.9 acres and it looks like a shape of "8". The entire field is at an altitude of 1000 meters above the sea level, and is suspended with three sides. There is only one stone paved path connecting it to the outer world. It was surrounded by the fogs and clouds all year round. Looking afar, the farm looks like floating in the air, and thus it got another name of "the Farmland in Air".

On top of the mountain where the Mountaintop Rice Field located, there are households that make the area a flat livable place. The flowers and other plants are growing out from the soil. With favorite corps planted, farmers have turned this dry and deadly mountain land into a livable green oasis. It is a classic example of how human beings should treat natures harmoniously. 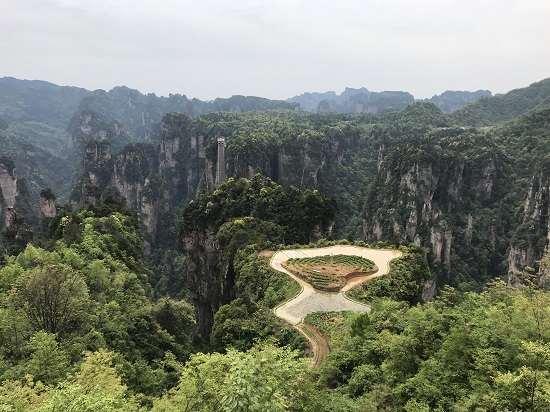 Address and How to Get there

Mountaintop Rice Filed is located near Tujia Fortified Mountain Village, which is 2,000 meters away from the southwest part of the Tianzi Mountain scenic area. Its south part is opposite to the Bailong Sky Elevator of Yuanjiajie scenic area, with a grand canyon in between. To go to the Mountaintop Rice Filed, tourists will have to take the cable car up to the top of the Tianzi Mountain firstly, and then take the environmentally friendly sightseeing shuttle bus to drive 40 minutes through the winding road to get there. Without going through these procedures, it is impossible to arrive at the Mountaintop Rice Filed in the Old House Field at all. 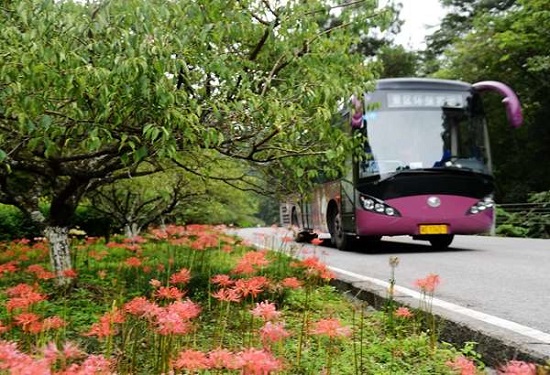 ☝ A shuttle bus running inside Zhangjiajie National Forest Park is taking tourists to the scenic area.

History of the Mountaintop Rice Filed - Start from Nothing

The story of how Mountaintop Rice Filed developed overtime is highly linked to an old farmer called Qiyun Peng. Mr. Qiyun Peng is 60 years old now. He grew up here on the mountain. As population increased, the land for agriculture was becoming less. From Qiyun Peng's childhood, his big family with 9 people under the same roof had poor quality of life based on the harvest from that few acres of agricultural land. After marriage, things became even more difficult as another people , his wife joining in to share the limited food, while these lands are not enough to feed all of them. Because of this, Qiyun Peng decided to develop another new farmland on the mountain. Therefore, from August 1983, Qiyun Peng and his wife have gotten up really early in the morning to develop a land for farming on the top of the mountain. They had to firstly break the big stones into small ones and then move them away, then covered the infertile land with soil and even nourish the soils. They also had to divert water to irrigate the land. All these tasks were hard to complete. After five years of continuous effort. Until 1988, the farmer Peng Qiyuan and his wife finally made the mountain filed capable of agriculture uses. You must be curious to know how does their mountaintop field look like? Well, the entire field composes of 1.5 acres of dry field with a shape of heart and 2.4 acres of water field surrounding the dry field. The outer-circled water field has the shape of "8" making it looks like a gourd. The water pond beneath the field has running water all year long. 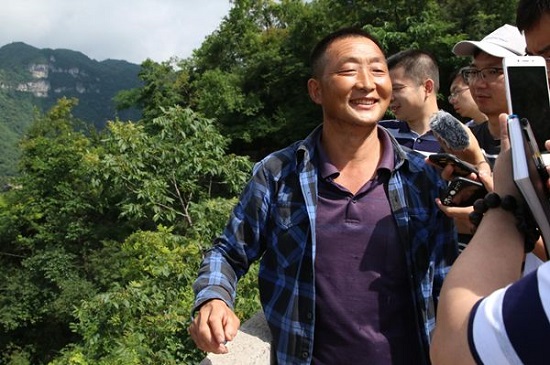 ☝ Qiyun Peng, the farmer who developed the Mountaintop Rice Field with his wife through years of hard work.

At the beginning , the soil of the field was not that great for planting. The harvest was also not that great. Qiyun Peng didn't take it easy with the mountain top field and he occasionally went to other places to pick up manure and dung of animals and throw them in the field to improve soil quality. He also burned some wild plants and mixed the ashes to the soil for the same purpose. After doing these for years, the field finally became nutritious and the soil were suitable for planting. Vegetables, fruits and rice on the mountaintop field were growing better and better from year to year. Qiyun Peng was able to earn living for the whole family by planting on this field. However, when it came to natural disaster followed by food shortage, he still had to go inside the deep mountain forest to pick fruits and collect honey as food alternatives to the family. Many times, he almost fell off the cliffs in doing so.

He and his land has been hidden in the area for many years that no other person knew about them. However, it is said that in year 2009, there was a young couple of South Korean people who uploaded the nice pictures of the Mountaintop Rice Filed online, and this brought lots of attention from visitors all over the world and attracted them to come here. The Mountaintop Rice Filed is thereafter becoming popular. It is now one the top ten sceneries of Zhangjiajie. 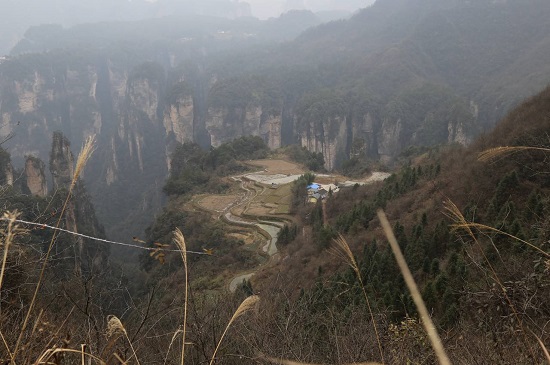 the Future of Mountaintop Rice Field

In order to follow the guidance from the government, Qiyun Peng and his family have moved their houses down to the mountain. However, he is still responsible for the daily works of the mountain top filed. Every visitor coming for the Mountaintop Rice Filed will have the opportunity to meet Mr. Peng, the master of the well known Mountaintop Rice Filed, as well as an experienced farmer who devoted his life to agriculture.

In the past, the most commonly planted corps all year round in this filed are rice, rape, tartary buckwheat and potatoes. However, with economic conditions improved in recent years , Mr. Qiyun Peng has barely grown food crops and cash crops since 2007. On the contrary, he started to plant "landscape" in his farmland. For instance, planting rapeseed and rhododendron in the dry filed and planting lotus in wet field. When it blossoms, the various colors of Rape flowers, rhododendron flowers and lotus flower form a sort of landscape. In this way, it is possible that in the near future, the Mountaintop Rice Filed in the Zhangjiajie National Forest Park will turn itself into the mountaintop garden or the air garden. 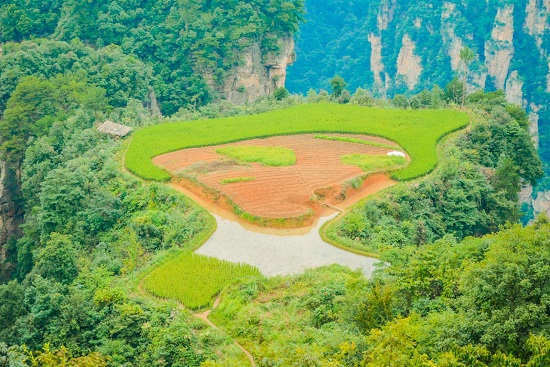 There is an observation deck at the Mountaintop Rice Filed. It is a great place to watch the sunrise, and it is also the only place that commands an overall view of the magnificent Bailong Sky Elevator. From the Mountaintop Rice Filed and walk down the pave made by stones and pebbles, visitors will see an iconic spot of the Old House Field called as "the Gathering of Heaven's Soldiers". These "soldiers" are actually rows of mountain pillars. They look like soldiers tall and strong, which wins them a good name of heaven's soldiers. The view is astonishing!