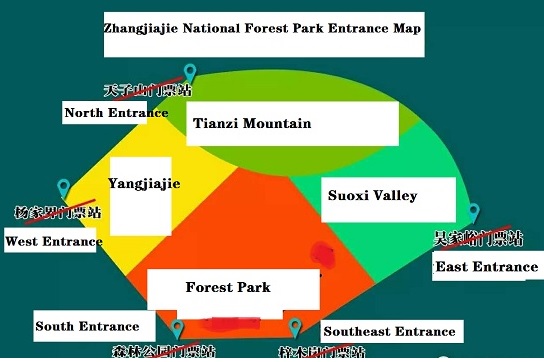 Among the five entrances, the south entrance is the main entrance, and it is the closest entrance to Zhangjiajie downtown. It takes only 40 minutes to travel from Zhangjiajie Central Bus Station to the South Entrance by the scheduled coach service. Therefore, many visitors would choose to enter the park from here. Having entered the park from here, visitors can walk along the Golden Whip Brook and then go up to the mountain. Downhill, they can walk through the Ten Mile Natural Gallery and then leave the park from the east entrance. There is no turning back involved for the entire itinerary and it is an ideal choice for young people who love hiking.

It takes about 50 minutes to travel from Zhangjiajie Central Bus Station in the downtown to East Entrance of the park by coach bus. Upon arrival, visitors can take the environmentally friendly sightseeing shuttle bus to go to Bailong Sky Elevator. With the Bailong Elevator, visitors can get to the mountaintop which is more than 1,000 meters above the sea level in 2 minutes. The East Entrance offers the easiest way to tour Zhangjiajie National Forest Park among the five entrances. What's more, it is very close to Wulingyuan downtown where there are many hotels, bars, shopping places and recreational activities. Since almost all group travelers would enter the park from here, the east entrance is extremely busy during peak season.

Overall, it is said that 95% of the visitors enter Zhangjiajie National Forest Park from the above two entrances. 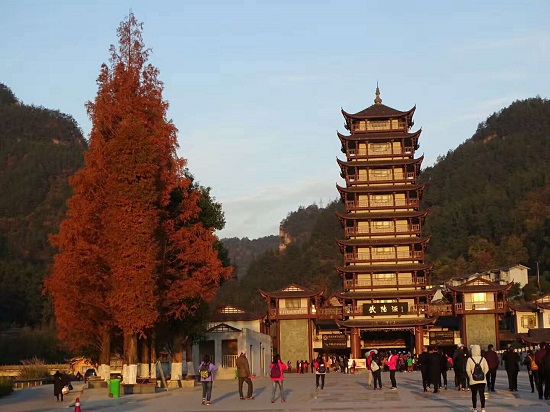 For visitors who do not want to pay to take the cable car to go up the mountain can try to enter from the north entrance whose former name is Tianzi Mountain Ticket Station. The downside is that the North Entrance is far from the downtown; To be more specific, driving distance from Zhangjiajie downtown to the north entrance is about 52 kilometers. In addition, the road to the north entrance is quite bumpy. To travel from Zhangjiajie Central Bus Station, it takes 2 hours to get here by bus. Upon arrival, visitors have to take trouble to change to the environmentally friendly sightseeing shuttle bus which is free of charge to go to the scenic area. The journey is a little more complicated and exhausting. The only advantage is that it saves the cable car cost. 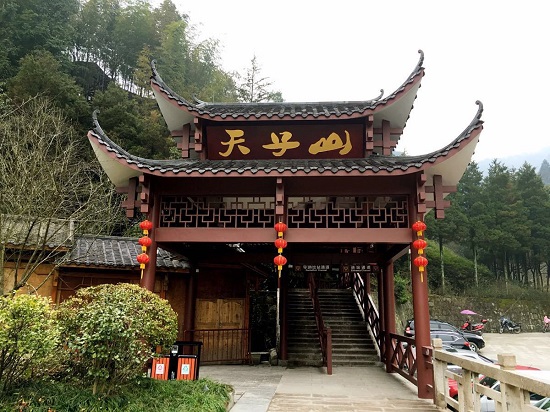 The Southeast entrance, locates on the top of the mountain. It is the farthest entrance to the city center of Zhangjiajie. 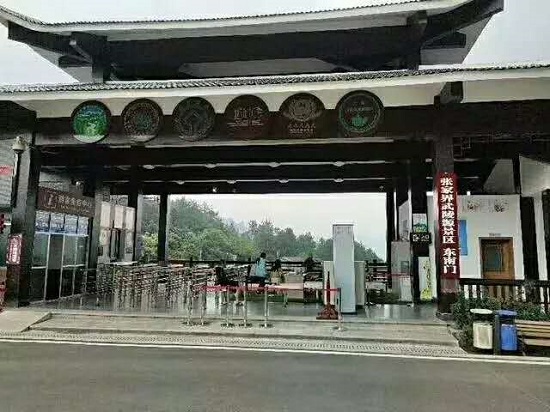 It is not convenient to go from the city center to the west entrance neither. Since the scenery of Yangjiajie Scenic Area is not as attractive as that of other scenic areas, fewer people would choose to enter the park from the west entrance.