Zhangjiajie Tianmen Mountain National Forest Park has the longest alpine cableway in the world. The cable starts from City Garden and passes by Zhangjiajie Railway Station, Zhangjiajie Bus Station, the downtown, Road with 99 bends, Tianmen Cave and finally arrives at the mountaintop with the entire trip takes about 28 minutes. The cableway has the length of 7,455 meters and runs at the speed of 6 meters per second. It has 98 cars with each of them can carry 8 people, making the passenger capacity of 1,000 persons an hour in one way direction. Tianmen Mountain cableway is the steepest in the country and it's rated as one of the "four wonders" in Zhangjiajie Tianmen Mountain National Forest Park. 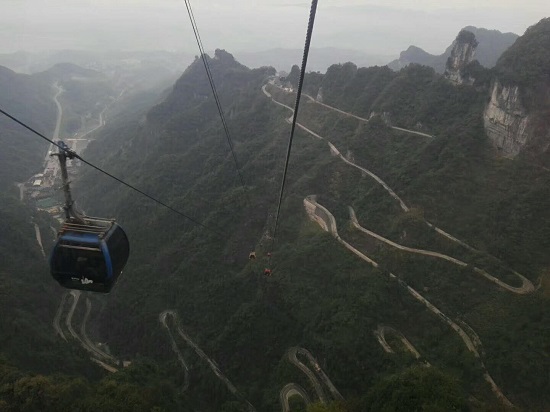 ☝ The cable cars in Tianmen Mountain

Cable cars going uphill open from 9 am to 5 pm, and cable cars going downhill close at around 7 pm. The scenic area administration would notify visitors before actually closing the downhill cable car service. It goes into inspection and maintenance every November. The whole procedure may last from a half month to one month and service will be temporarily closed during this time. Visitors can rely on either the Tianmen Cave Express or the sightseeing shuttle buses to go up and down the mountain when this longest cable is shut down. 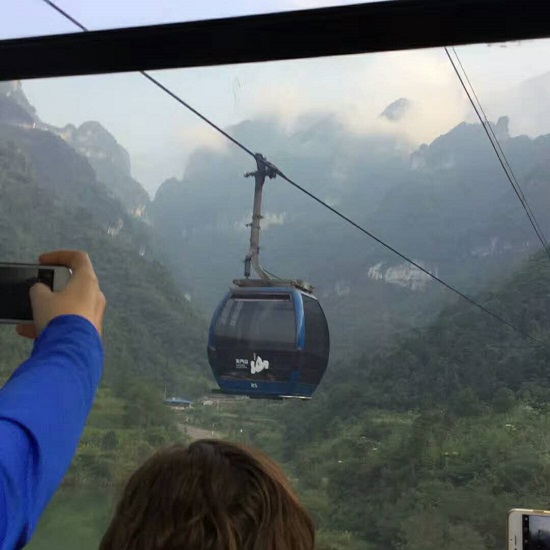 ☝ The cable ride in Tianmen Mountain National Forest Park. Photo was taken we our people are on the cable car trip.

The middle station of Tianmen Mountain Cableway is basically a transfer station. Tourists who do not want to go directly to the top of the mountain can alight here.

The upper cable car station locates on the mountaintop. It is very convenient to go from here to such attractions including the Heavenly Summit between Clouds and Dreams, the glass skywalk and the ghost valley plank road. 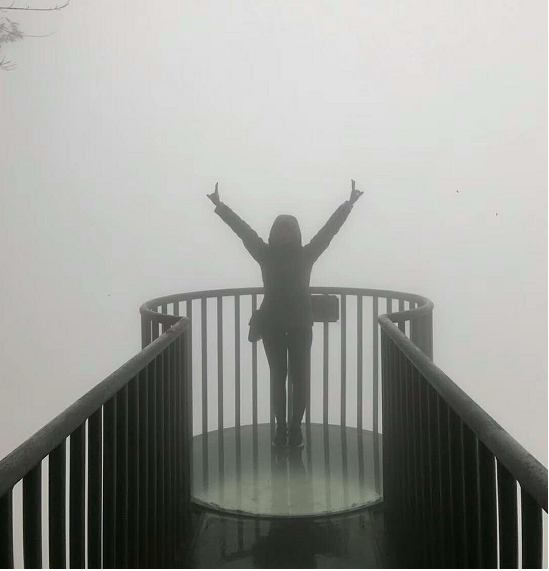 How safe are Tianmen Cable Cars?

Tianmen Mountain cableway uses the world's most advanced technologies. Except for the support stands, all accessories are manufactured by European countries in accordance with European standards.

It has a total of 57 support stands, of which 3 are for emergency. These emergency stands are used to transfer visitors to the ground safely once any emergency or injury occurs, and it can be used in either the situation of "horizontal rescue" or "vertical rescue".

The lower, middle and upper cableway stations are all installed with lightning protection system, rescue system and etc. In addition to daily maintenance, the cableway undergoes an annual inspection beginning in November to make ensure it can operate safely.

Except for a slight bump when passing through the node, Tianmen Mountain cable runs smoothly the first half journey. After passing the reservoir it starts the second half journey which is a bit stressed to some people. The cable car rises suddenly as it is approaching to the mountain. When it's about to reach the mountaintop, the cable car has sharply sways and it goes up almost vertically. People who suffered fear of heights previously please notice this and get mentally ready in advance to make sure it won't negatively affect the overall travel experience.

Cable car ride is not the only option. Travelers wouldn't like to use it can take the sightseeing bus instead. 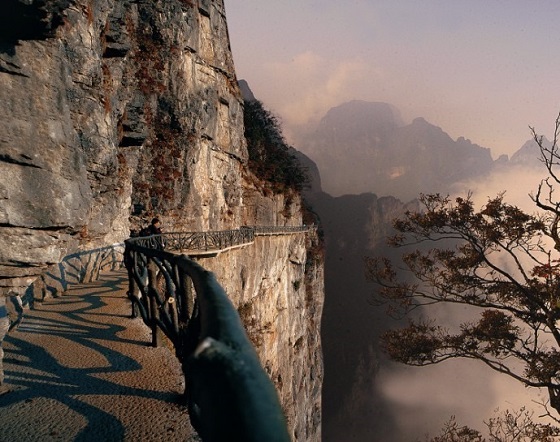 ☝ The ghost path or Guigu plank road on Tianmen Mountain

Every day, there are a lot of people visiting Zhangjiajie Tianmen Mountain. Since many people prefer to go up and down the mountain via cable car, the boarding areas are always busy and crowded and tourists have to wait normally 1 to 2 hours to use the service. Many tourists were forced to change their next schedules as they can't catch cable cars as wished on time. For backpackers who want to catch the train or the plane the same day after visiting Tianmen Mountain, please try your best to go there early. During busy travel season, upon arrival to the mountaintop, if you want to take cable cars for return as well, you are advised to go firstly to the ticket station to fetch the queue number. Since your queue number usually approaches 2-3 hours later, you can just take the tour on the mountain during this period. Otherwise, if you choose to queue up for tickets after finishing the tour, you will have to allow unwanted long hours of waiting as we mentioned above.