The stairway to heaven with 999 steps is a well known tourist attraction in Zhangjiajie Tianmen Mountain National Forest Park. It refers to the stone step walkway for people to travel between Tianmen Cave and the Cave Square on the mountainside. Besides offering unique sightseeing experience, the stairway to heaven also has a profound meaning and it is therefore rated as one of the "Top Ten Interesting Views of Tianmen Mountain". 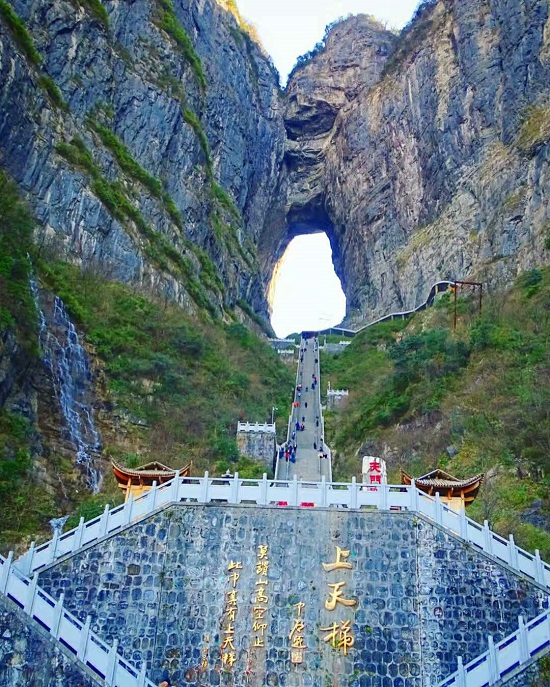 Decryption of Stairway to Heaven with 999 Steps

Located near the lower end of the stairway to heaven on the Cave Square, the Altar of Tianmen is the place where believers normally worship. It is said that Tianmen Mountain has a spiritual connection with god. Here, by lighting up the "five flavor grass" which symbolizes five tastes of life including sourness, sweetness, bitterness, spicy and saltiness, devoted believers can then set up the mutual induction bridge between the Heaven and human. Subsequently, through sincere worships, believers can receive blessings of prosperity and peace from the god.

On the two sides of the 999-step stairway to heaven, there are five platforms for rest and blessing naming as "You Yu", "Qin Se", "Chang Sheng", "Qing Yun" and "Ru Yi", which respectively represent five blessings of wealth, happiness, long life, power and luck in Chinese traditional culture; There are also nine slopes including five gentle slopes and four steep slopes along this gateway to heaven. In Chinese culture, the number Nine means infinity, they are using nine slopes to remind travelers that there are countless ups and downs throughout the entire road of life, meaning that one needs to overcome numerous difficulties and obstacles to be successful. In one word, the whole story of life is embedded in the steps to heaven on the Tianmen Mountain. 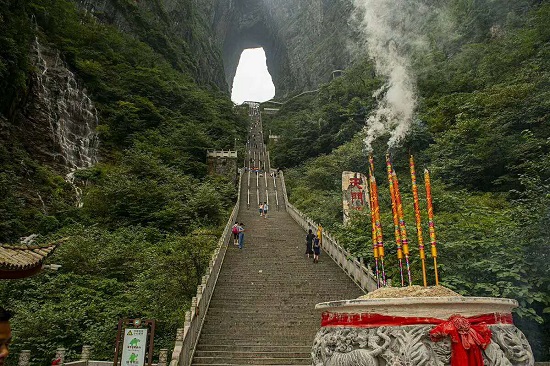 Cultural Implication of the 999 Steps

"9" is considered to be a unique and supreme number in Chinese numerology, as it means the extreme or the outermost of something positive; In addition, the pronunciation of "9" is the same as another Chinese character "久", which means long-term or eternity, so "9" is considered by Chinese as the most auspicious number from the 0-10 scale. The triple nine "999" means supremacy of power and prosperity in long term. The steps of 999 has the deep love and delivers best wishes to all of its travelers. 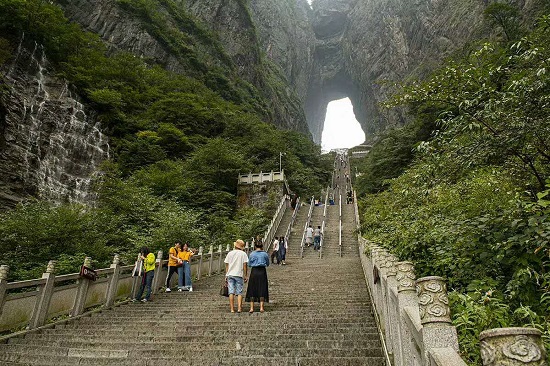 Climbing up the 999 steps to heaven in Tianmen Mountain is similar to climbing the Great Wall in Beijing. For many visitors, it is an instinctive behavior instead of a choice. The 999-step gateway to heaven is becoming the most popular place on many travelers bucket list. No matter how hard and tired it is to climb, travelers are still willing to try and won't quite until they succeed. This is probably related to the positive cultural Tianmen Mountain 999-step stairway initiated, that is to inspire travelers persistence and ambition to pursue excellence.

Two thirds of the stairway to heaven is comprised by steps with steep slopes of more than 37 degrees, some steps even have slopes of 41 degrees. In addition, the steps are all very narrow which makes it even difficult for people to walk on. Some visitors legs turn soft as soon as they see these steps, so they decide to give up climbing from the beginning. 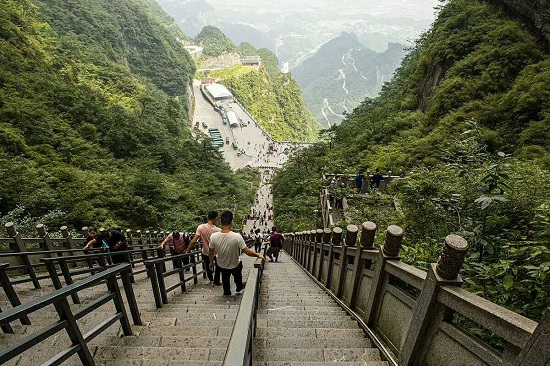 The management team of Zhangjiajie Tianmen Mountain National Forest Park knows exactly what visitors are thinking, so right next to the stairway there is a five-segment tunnel escalator that runs parallel to the stairway. Visitors who do not want to walk the stairway to heaven can pay CNY 32 Yuan per person and use the escalator to do the same trip. It is quite easy and fast to travel between Tianmen Cave and the Cave Square with the tunnel escalator.

Visitors who want to experience the 999 steps in person are advised to make walk there as slow as possible. People with poor physical strength may walk up and down the stairs with both their hands and feet and take frequent rests in between the steps. This will somehow reduce the damage to the knees while preventing the legs and feet from being sore after a long time of walk so that it won't affect their later travel schedule.

It is worth mentioning that girls are advised not to wear skirts to climb the 999 steps to prevent embarrassment or leakage of privacy.